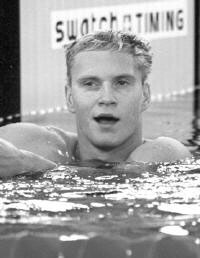 On July 4, 1974, in Volgograd, Russia, Denis Pankratov was born. He was to become the greatest butterfly swimmer to swim for his country. He and Volgograd teammate, Evgenyi Sadovyi, both became Olympic champions – Sadovyi in the 200m and 400m freestyle and Pankratov in the 100m and 200m butterfly.

At the 1994 World Championships in Rome, Pankratov swam head-to-head with all the best swimmers of the world. He won the 200m butterfly, placed second in the 4x100m medley and third in the 100m butterfly. This competition established Pankratov’s world  dominance in the butterfly and two years later in Atlanta, at the 1996 Olympic Games, he won two gold medals, one each in the 100m and 200m butterfly and a silver medal in the 4x100m medley with his Russian teammates. His 100m butterfly victory was another world record of 52.27, breaking his own record set the previous year.

Denis Pankratov is the only Russian swimmer to win a medal in the 100m butterfly in Olympic competition.