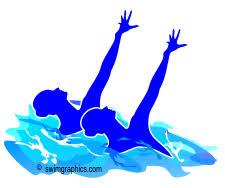 In the young sport of synchronized swimming so popular in the United States and Canada, the quality and quantity of competition has improved dramatically since the sport began its national competition in 1946, adding solo in 1950.  Ruth and Gloria Geduldig of the Chicago Town Club were the first indoor and outdoor duet champions.

In recognizing the recently retired Pame Morris as an honoree, the Swimming Hall of Fame acknowledges synchronized swimming as a mature sport in the swimming framework of aquatic sports.

**Please note: this bio was written the year the honoree was inducted, 1965.

Posted by Meg Keller-Marvin at 5:18 PM