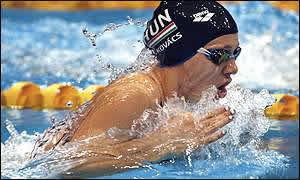 Born in Budapest, Agnes Kovacs learned to swim when she was just two and a half years old, and loved the water from the very start. When she was just nine years old, her swimming teacher, Bea Szucs recommended she join the program at the Kőér St. Pool where she made rapid progress. At the age of 13 she had her first success in the Hungarian National Age Group Championships and as a fourteen year old, she won the European Junior Championship in the 100 yard breaststroke. Within days of her fifteenth birthday, she won the Olympic bronze medal in the 200 meter breaststroke in Atlanta, in 1996.

Following in the wake of Hall of Famer Krisztina Egerszegi, Agnes would be named Hungary’s best female swimmer and her country’s Sportswoman of the year for the next four years. Dominating the 200 meter breaststroke in all international competition from 1997 to 2000, she won gold at both the FINA World Championships in 1998, and then the Olympic gold medal, in Sydney, in 2000.

Following her Olympic success, Kovacs won her event again at the 2001 FINA Championships in Fukuoka, Japan, before moving to the United States to attend Arizona State University. When she left ASU in 2005 it was as a fifteen-time All-American, as the schools top senior female athlete, and with a degree in supply chain management.

Returning to Hungary, she rejoined the national team program and was a crowd favorite, winning three medals at the 2006 European Championships in the same pool where she first learned to swim twenty-two years earlier, on Budapest’s historic Margaret Island.

In addition to her Olympic and NCAA success, Agnes won a total of 25 medals at the European Championships, long and short course, and was a 53-time Hungarian National Champion from 1996 through 2007.

For Agnes, the support of her family was key to becoming a top level swimmer. She is currently married and lives with her husband and son in Hungary, where she is a PhD student at the Semmelweis University Faculty of Physical Education and Sports Sciences.

Posted by Meg Keller-Marvin at 7:37 AM