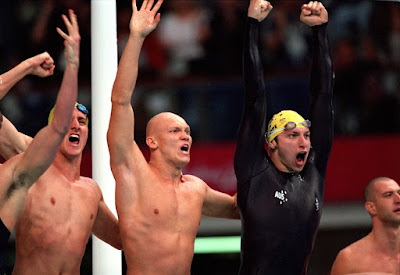 Michael Klim has been called the best relay swimmer ever.  He is a three-time Olympian, multi-time world champion and 21-time world record holder.  1998 was Klim’s year in the sun. In January, the FINA World Aquatics Championships were held in Perth, Western Australia, and in front of a boisterous home crowd, he was the leading swimmer of the meet. He triumphed in the 200m freestyle and the 100m butterfly, added silver in the 100m freestyle and bronze in the 50m freestyle. He was a member of each of Australia’s three relay teams, winning gold in the 4×200m freestyle relay and 4×100m medley relay, and a silver in the 4×100m freestyle relay.

Michael Klim and the gold-medal Australian Relay team at the 2000 Sydney Olympics
Come and meet Klim in person and hear his incredible life story at the ISHOF Induction dinner on Saturday, April 25, 2020. Become an ISHOF Legacy Member and attend the ISHOF Induction Dinner for FREE. Can’t attend the event? Please consider donating to ISHOF, support Klim and our other inspirational Honorees.

Michael Klim holding the Australian flag with his medals.
His 100m freestyle world record, was bested by Pieter van den Hoogenband in the semi’s. In the final, he turned first at the wall, but his legs gave out in the second half and he placed fourth. In the 100m butterfly, he was the world record holder, again turning first at the wall heavily under world record pace but was cut down in the closing stages by Sweden’s Lars Frölander, finishing second. On the final night, he claimed silver as part of the 4×100m medley relay team. Still quite a performance. 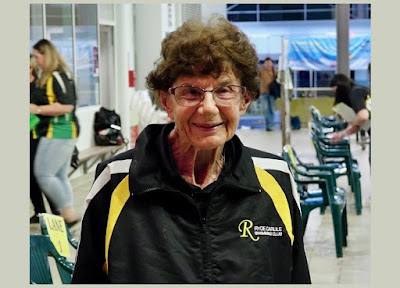 Ursula and Forbes Carlile Photo Courtesy:
Ursula Carlile began her international coaching career in the Netherlands, where she and Forbes co-coached the Dutch National team from 1962-64 and where she was the Dutch Olympic Co-Head Coach with her husband.  In the following decade, the husband and wife team made frequent periodic visits to the People’s Republic of China, working with China’s top coaches and national team.  In 1980, the Carliles were named Honorary Olympic Coaches for China.

Ursula Carlile Photo Courtesy:
Come and meet Carlile in person and hear his incredible life story at the ISHOF Induction dinner on Saturday, April 25, 2020. Become an ISHOF Legacy Member and attend the ISHOF Induction Dinner for FREE. Can’t attend the event? Please consider donating to ISHOF, support Ursula and our other inspirational Honorees.

In 1972, Ursula became Australia’s first female Olympic swimming coach when she was selected as an assistant coach to Don Talbot, for the Munich Games. She served as an assistant to Terry Gathercole the next year at the World Championships, held in Cali, Colombia. In 1974, she was selected as Australia’s first female Head Coach for the Commonwealth Games, held in Christchurch, New Zealand.  In yet another sterling accomplishment, during the 1970’s and ’80’s, she and Forbes coached five Olympians – all of them world record-holders: Karen Moras, Shane Gould, Jenny Turrall, Gail Neal and John Bennett.
In the days when Forbes Carlile could not secure official staff selection to the Australian Olympic team, it was Ursula Carlile who accompanied Gould as chaperone at the Munich 1972 Games. Forbes was there in a commentator’s position with the media as Gould raced to what remains a record five-medal haul in solo events among women, her three golds secured with World records, a silver and a bronze completing a unique collection for a a pioneering pantheon.  Gould is Dr. Shane Gould these days.
A Life Member of the Australian Swimming Coaches and Teachers Association, Ursula Carlile lectured frequently around the world until lately. Forbes, pioneer of the pace clock and several aspects of swimming science, entered the Hall of Fame in 1976. He passed away on the eve of the Rio Olympic Games in 2016.

Details are attached and are also available on our website www.tsdhof.org

Posted by Meg Keller-Marvin at 3:41 PM No comments: