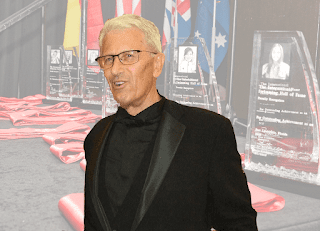 Camillo’s influence, knowledge and wisdom will be sorely missed by the International Swimming Hall of Fame family.  He served the aquatic community well.  Anybody who ever had the privilege of meeting or working with Camillo walked away with greater perspectives. Of all the people that I have met and work with over the years, I cannot think of a finer gentleman who radiated confidence and respect more than Camillo.   He remains the epitome of a true journalist dedicated to aquatic sports. Thank you for your service! – Brent Rutemiller, ISHOF CEO, Swimming World Magazine Publisher

Cametti worked as an international journalist for almost 50 years.  As a former swimmer and water polo player from Verona, Italy, it was only natural that he was drawn to aquatics and became very successful at covering and promoting aquatic athletes.

He has been at every Olympic Games in a journalistic capacity since 1972 beginning in Munich, Germany and ending in Rio in 2016 for a total of thirteen Olympic Games.  In addition to the Olympic Games, Cametti has covered most and attended all the FINA World Championships since their inception in Belgrade, in 1973.

He has served a Founder, Publisher and Editor-in-Chief for various swimming magazines such as FINA’s The World of Swimming, the Italian Swimming Federations’s FIN News, Il Mondo del Nuoto, and La Technica de Nuoto.

In addition to his journalist prowess, Cametti has served as a Board Member for the ITALIAN SWIMMING Federation (FIN), as a member of the IOC ORIS Working Group for Aquatic Sports and Chairman of the AIPS Swimming Commission (1990-2002).  He was a member of the FINA Technical Swimming Committee from 1998 to 1996, and was the first to propose the recognition of the short course competitions and world records as well as the introduction, recognition and acceptance of prize money in selected competitions.

Posted by Meg Keller-Marvin at 5:01 AM