Friday, July 16, Ft. Lauderdale Sun Sentinel: Pool for the stars: New Hall of Fame complex on the way with dive tower to the sky 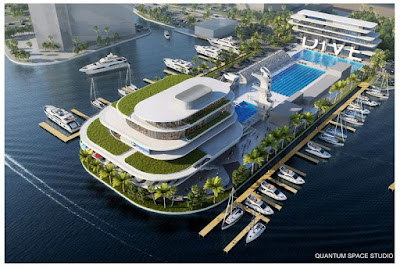 FORT LAUDERDALE — Just a block from the ocean, a swimmer’s paradise with sparkling pools and the tallest dive tower in the USA is taking shape to the tune of $47 million.

When the new Swimming Hall of Fame complex opens, all eyes will be on Fort Lauderdale, fans say.

Avid local swimmer Debbie Rosenbaum knows exactly when the pools closed: April 13, 2019. And she knows when they are set to reopen: sometime in September 2022.

“We can taste it, even though it’s that far away,” said Rosenbaum, a Fort Lauderdale paralegal whose 26-year-old son started swimming at the pool at age 5 and is now a national champ.

Rosenbaum started swimming laps at the Fort Lauderdale Aquatic Center five years ago to help her get over a divorce and never stopped.

“Whatever is happening in your life, when you’re in the water and swimming, you just forget about whatever else is going on in the world,” she said. “It’s one of the best things you can do for yourself. When you get out of the water, you think, ‘I can fight the fight and keep going.’”

What Is This?
Expertise You Can Trust from GM Genuine Parts

GM Genuine Parts and ACDelco GM OE parts are designed to go the distance and built to support the precise engineering of your Chevrolet, Buick, GMC, or Cadillac vehicle.

Olympians have done laps there. Kids have learned to swim. And tourists have been coming since the complex opened in 1965.

All the fun stopped when the renovation got under way more than two years ago. But when the complex reopens, it’s going to be bigger and better than it was back in its glory days, city officials say.

“All I hear from people is the real excitement about it,” Commissioner Steve Glassman said. “People are really psyched about the project. We were at one point the diving and swimming capital of the world. Bottomline, I think that expression ‘If you build it, they will come,’ that’s going to be exactly what’s happening here.”

The complex, at 501 Seabreeze Blvd., south of Las Olas, is getting new pools, a new dive tower, an open-air amenity deck, new locker rooms and a new grandstand and bleachers for spectators.

RELATED: An eight-story plunge: One of the world’s tallest diving platforms is coming to South Florida »

City leaders say it’s worth every penny. The tower, with its flared platforms, resembles a ship’s hull and stands nearly nine stories high.

Divers will do their thing — reaching speeds up to 60 mph in three seconds — from a 27-meter diving platform, the tallest in the western hemisphere. But first they’ll have to climb 162 steps to the top.

The tower has nine platforms in all so divers of all levels can use it. When all is said and done there will be a new competition pool, new diving pool for the dive tower and a renovated training pool.

Big change is also in the works for the nearby International Swimming Hall of Fame, which shares space on the same 5-acre peninsula that juts into the Intracoastal Waterway.

The nonprofit hopes to bring a new museum to town, said Brent Rutemiller, CEO of the Hall of Fame museum and a former national swim team coach.

The $90 million project calls for two new buildings that would open in 2025, if all goes as planned, said Mario Caprini, CEO of Capital Group P3 of Florida and a partner in the project with Hensel Phelps Construction — the same contractor handling the renovation of the aquatic center.

The Hall of Fame wants to knock down its two-story welcome center on the east side fronting Seabreeze Boulevard and its two-story museum to the west overlooking the Intracoastal.

‘Long time in the making’

“It will be visually stunning,” Rutemiller said. “This has been a long time in the making.”

The museum, on the third floor of the west building, would include a restaurant on the top floor with a 360-degree view of Fort Lauderdale, the ocean and Intracoastal.

There would be space for a ballroom, meeting space and tenants as well. A teaching pool hidden underneath the grandstands would sit next to an open plaza and gift shop.

Parking for 202 spaces would be on the second floor, with event space and offices on the fourth floor.

The financial model hinges on space for tenants, Rutemiller said.

RELATED: New pools for Fort Lauderdale? It's about time »

The plan was presented to the city in September 2020 by Hensel Phelps Construction.

Under the proposal, the developer would pay for construction, but the city would guarantee the loan for both buildings, Rutemiller said.

Over the course of the 30-year loan, the city would contribute an estimated $5 million, Caprini said.

“We intend on funding 100% of the project,” he said. “It will be a master lease with the city over 30 years. After 30 years the buildings would revert back to the city for $1. And they are free and clear.”

The pools at the Aquatic Center would stay open during construction, Rutemiller said.

Residents of the 15-story Venetian condo a block to the north are abuzz about the plan to build such a tall Hall of Fame museum, said John Burns, association president.

“The higher it goes, the more it blocks views people have had for a long time,” Burns said.

Larry Burnette, who lives on the 14th floor of the Venetian, hopes the height gets scaled back.

“I thought the design of the building was quite beautiful,” he said. “I just wonder if it’s not too big.”

Rutemiller says residents will get a chance to share their opinions in the coming months as the project moves forward.

Time was not kind to the Fort Lauderdale Aquatics Center.

By the mid-1980s, the complex began showing some age. By 2011, the grandstands were condemned after being deemed structurally unsound. Netting was installed to catch falling pieces of concrete.

As it happens
Get updates on the coronavirus pandemic and other news as it happens with our free breaking news email alerts.

That was the last year the Hall of Fame pool hosted a major national championship, said Laura Voet, manager of the aquatic center. Temporary portable bleachers were brought in to accommodate smaller crowds, but Fort Lauderdale lost its rep as the diving and swimming capital of the world.

Then in April 2019, the pools finally closed to make way for long-awaited renovations.

RELATED: More than 50 years of ups and downs: The rich history of International Swimming Hall of Fame/Aquatic Center »

“People are anxiously awaiting the reopening,” Voet said. “We all are. Countless people from all over the world and the local community have learned to swim here. Anyone can swim here. It’s not just for elite athletes. Your grandmother can swim here. And an Olympic athlete can swim here. You can come here and you can be swimming next to a superstar.”

Every day people stop by to ask when the pools will reopen, Voet said.

“They used to swim here and they can’t wait for it to come back,” she said. “It will be worth the wait.”

Susannah Bryan can be reached at sbryan@sunsentinel.com or on Twitter @Susannah_Bryan

Posted by Meg Keller-Marvin at 9:05 AM