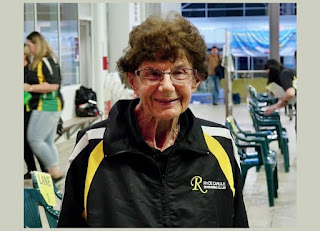 Ursula Carlile began her international coaching career in the Netherlands, where she and Forbes co-coached the Dutch National team from 1962-64 and where she was the Dutch Olympic Co-Head Coach with her husband.  In the following decade, the husband and wife team made frequent periodic visits to the People’s Republic of China, working with China’s top coaches and national team.  In 1980, the Carliles were named Honorary Olympic Coaches for China.

Come and meet Carlile in person and hear his incredible life story at the ISHOF Induction dinner on Saturday, October 9, 2021. Become an ISHOF Legacy Member and attend the ISHOF Induction Dinner for FREE. Can’t attend the event? Please consider donating to ISHOF, support Ursula and our other inspirational Honorees.

In 1972, Ursula became Australia’s first female Olympic swimming coach when she was selected as an assistant coach to Don Talbot, for the Munich Games. She served as an assistant to Terry Gathercole the next year at the World Championships, held in Cali, Colombia. In 1974, she was selected as Australia’s first female Head Coach for the Commonwealth Games, held in Christchurch, New Zealand.  In yet another sterling accomplishment, during the 1970’s and ’80’s, she and Forbes coached five Olympians – all of them world record-holders: Karen Moras, Shane Gould, Jenny Turrall, Gail Neal and John Bennett.

In the days when Forbes Carlile could not secure official staff selection to the Australian Olympic team, it was Ursula Carlile who accompanied Gould as chaperone at the Munich 1972 Games. Forbes was there in a commentator’s position with the media as Gould raced to what remains a record five-medal haul in solo events among women, her three golds secured with World records, a silver and a bronze completing a unique collection for a a pioneering pantheon.  Gould is Dr. Shane Gould these days.

A Life Member of the Australian Swimming Coaches and Teachers Association, Ursula Carlile lectured frequently around the world until lately. Forbes, pioneer of the pace clock and several aspects of swimming science, entered the Hall of Fame in 1976. He passed away on the eve of the Rio Olympic Games in 2016.

The International Swimming Hall of Fame (ISHOF) Induction Ceremony is shaping up to be a star-studded weekend with ISHOF Honoree and Sullivan Award Winner, Debbie Meyer, and double Olympic gold-medalist and everyone’s favorite Olympic swimming broadcaster, Rowdy Gaines acting as co-emcees and hosts of the induction with multiple events spread out over two days in beautiful Fort Lauderdale, Florida.

Make your plans now to attend the weekend of October 8-9, 2021!  ISHOF Members can purchase the Complete Weekend Package (see below) and save! (Get info on membership here.) Can’t attend the event? Donate to ISHOF to support our honorees.

This year’s International Swimming Hall of Fame Honorees include:

In addition to the Class of 2020, two Honorees from the Class of 2019, who were unable to attend last year, will be present to be inducted. Honor Swimmer: Otylia Jedrzejczak (POL) and Honor Diver: Li Ting (CHN).